A meeting of the greats: Doak polishes the Hotchkin 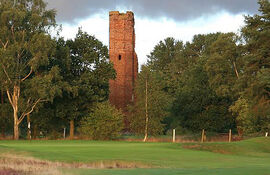 Combine a World Top 100 Rated golf course and a great golf architect - and the result is the Hotchkin course at Woodhall Spa being polished to heathland perfection by Tom Doak, arguably the leading golf course architect in the world.

In 2015, a decision was taken to renovate the Hotchkin Course to maintain our responsibility for looking after a National Treasure.

As equipment and golfer’s performance has improved over the years we wanted to make sure that the course is still a challenge to the top players.

At the same time, this would allow us to resolve bunker maintenance issues by implementing new design changes, return the course back to heathland appearance for ecological reasons and ensure we retain our status in the ‘Top 100 Courses in the World’ for the years to come.

Tom Doak
After a tender process, Tom Doak was appointed. It’s fair to say the project was in safe hands from the offset as in 2018, 22% of the top 50 courses on the Golf Digest Top 200 Courses World list were designed, restored, or rebuilt by his company, Renaissance Golf Design.

The project brings Doak back to a course which he first visited as a student 30 years ago. Since then he’s built many wonderful golf courses, with several featuring highly in the world’s top 100, and he has restored others. But he well remembers his first visit to Woodhall Spa and his meeting with Neil Hotchkin, whose father, Stafford, provided the land for the course, which was formally opened in 1905.

Harry Vardon, J.H. Taylor and Harry Colt all contributed to the early design of the course, but it was Stafford Vere Hotchkin who made it what it is, remodelling many of the holes, moving greens and tees and adjusting hazard locations. His son Neil carried on his work and in 1995 sold it to what was then the English Golf Union.

Tom Doak enjoys the lengthy family connection and his interest is also caught by the rare opportunity to work on a heathland course – but he’s not here to put a Doak stamp on the Hotchkin. He’s here because it’s a special course and he can help to preserve it.

“I only do this for golf courses I feel strongly about. I only gravitated to what I do because I really love the variety of good golf courses and I want to preserve that.

“I do this kind of as a public service. There are plenty of architects who would be here, just to say they are working here, or have changed something because that’s the most important thing they’ve done.

“I’m here for the opposite reason. I’m here to preserve what’s here and hope that someone in 50 years’ time will treat my golf courses in the same way – instead of changing a bunker to say they have worked on it!”

One of the key results will be bunkers which are easier to maintain – but not easier to play out of – and the opening up of the course, revealing magnificent golfing vistas.

Doak has never worked on anything like them before, but he and his team are quick learners. “After two days we had worked on about 12 bunkers, so we got the hang of it pretty fast and it’s going well,” he said after his first visit in 2016.

“These bunkers, being as deep as they are, add character to the golf course, but it’s very hard to maintain the faces, especially the south-facing faces. It’s hard to keep grass on them, it’s hard to keep anything but dirt on them,” he explained.

The solutions can include a little judicious reshaping, or moving heather on to the faces – with every step of the work watched closely by Natural England’s representative due to the Hotchkin being a Site of Special Scientific Interest.

The removal of trees and scrub will not only open up the course but also put a renewed emphasis on strategy for the players. As the trees encroached it became increasingly important to play straight shots, rather than concentrating on the angle of attack. “There used to be more  strategy , the angle of the second shot was more important and we are trying to get some of that back,” said Doak.

The Project
Work commenced in November 2016 and the plan was to renovate six holes per year for three years.

First phase
The first phase included holes 7, 8, 9, 10, 11 and 13 and was successfully completed in February 2017.  The most significant change was to the 13th hole, where the fairway was moved to the right by some 25 yards to give an improved angle into the green.  All aspects of these were considered, including green sizes, bunker placements/renovation, fairway widths and tee angles/placement.  Tree removal has been significant with heather restoration a priority.

The changes to these holes are quite dramatic as many trees were removed in an attempt to restore the heathland characteristics as well as renovating all of the bunkers.  In particular, the par 3 5th hole has changed the most as new tees have been built some 50 yards to the right of the existing ones for health and safety reasons.

The green complex has been adjusted accordingly and gives a completely different challenge compared to the existing hole.  The 14th hole has also seen a significant change with many trees removed and old bunkers re-instated.  This hole is dramatically different to the old one and presents an excellent challenge to golfers of all standards.  This phase of work was completed in March 2018.

Moving forward
The course has transformed from a tree-lined appearance to open heathland and is very much in keeping with the classic British heathland look, which has been overwhelmingly supported by the golf purists, golf course architects and the golf industry as a whole.  By summer 2019, the course will be in its finest form and truly representative of its world status.

During this process the course has remained open and such has been the quality of the restoration work, the course has been in excellent condition as soon as the work was completed.  It is very interesting to note that in 2017 the Brabazon Trophy (the English Open amateur Strokeplay Championship) was played just two months after Phase 1 was completed and the course was in superb condition.