The Hotchkin Course at Woodhall Spa

The Hotchkin Course at the National Golf Centre, Woodhall Spa, is consistently rated among the world’s finest heathland golf experiences and a favourite destination for golf breaks.

Take a look at our hole by hole course tour by clicking on the numbers above.

For more than a century, golf travellers have been welcomed to this exquisite heathland course, famous for it’s natural, dramatic bunkering and distinct tactical challenge.

The course was built on a sandy tract of land to the north of the village and has classic heathland characteristics. Such is the importance of the surroundings, Natural England declared the course a Site of Special Scientific Interest (SSSI) and is a wonderful example of how golf and nature can benefit each other.

The Hotchkin course has seen various development phases over the last 115 years culminating in an 18 hole renovation project, which was completed in April 2020. Tom Doak, arguably the leading golf course architect in the world today, led the renovation project and re-introduced so many of the original features that had been lost through time. Also, a particular effort was made to return to a more rustic look by creating rough edges around bunkers and leaving many areas untouched as we believe that a heathland course should not be over-manicured.

The course is a fair test of strategic golf. The firm heathland fairways are generous in width and the greens have only subtle borrows. However, the 143 dramatic, cavernous bunkers and scrub, gorse and heather await errant shots!

Being rated so highly in the world rankings for the last 50 years, is an indication to the courses’ quality and architecture.

54th best course in the world

Woodhall Spa's Hotchkin course was described as "one of golf's supreme shotmaking tests" as it was named the 54th best course in the world in Golf magazine's benchmark ranking.

The Hotchkin rose 12 places from its position two years ago in the American publication's 2020-21 list of the greatest courses in the world.

The headline rise is vindication of the club's decision to engage feted architect Tom Doak to renovate the heathland masterpiece over the course of three years.

The Lincolnshire course's significant jump placed it ahead of some of the most iconic and alluring names in the game; Ballyneal, Kiawah Island (Ocean), Cape Wickham, Royal Lytham, Sawgrass, Whistling Straits, Bandon Dunes, Cabot Links, Bandon Trails, Barnbougle (Lost Farm) and Royal Melbourne (East) were all ranked below the Hotchkin.

The Hotchkin was one of 30 courses from Britain and Ireland, with only 15 rated better than it. There was one additional entry from mainland Europe, making the Hotchkin the 16th best course in the whole of the continent.

In ranking the course at No.54, Golf's new architecture editor - the highly-respected Ran Morrisset - said: "Harry Vardon left us much more than six Open wins and a grip. Woodhall Spa is his design legacy, an intriguing heathland/inland links blend, an oasis of tumbling terrain amid the surrounding flat fenland of Lincolnshire.

"Deep bunkers are its defining trait, along with plentiful gorse and a stellar set of par 3s. Credit architects HS Colt and SV Hotchkin for enhancing Vardon's work and turning the course into one of golf's supreme shotmaking tests." Doak's work at Woodhall Spa centred around hundreds of trees removed, bunkers restored, created and filled in, and the encouragement of heather.

In addition to creating a greater heathland feel that has significant environmental benefits, the more open course now enjoys expansive views and is already improving further its already renowned turf. "We are naturally delighted with this ranking," said Richard Latham, general manager. "To be so high in such a respected list is very pleasing and credit must go to Tom and his team - as well as our in-house staff who carried out so much of the renovation work - for improving the course to such a degree that this esteemed panel view us so highly.

"To be rated among the stellar names in world golf illustrates what I hope anyone who has visited us recently knows; the Hotchkin is a world-class golf course."

The future of the Hotchkin Course was discussed at great length in 2015. These discussions centred around the poor condition of the bunkers and associated maintenance issues, the changing nature of the site (a more parkland feel) due to too many trees, a review of the course from a championship perspective for the elite player and the falling position in the world ranking lists.

Outside assistance was required and after initial discussions with Tom Doak, a course development plan for the next 25 years was presented. This plan incorporated Tom’s considered opinion on how the course should play and he highlighted key areas which included:

A wholesale renovation of bunkers.
A return to some of the original design concepts, which had been lost over the years.
A significant clearance of trees and scrub.
Restoration of heather and other heathland habitats.
Return greens to their original sizes.

Above all else, Tom wanted to find a consistent and coherent approach that covered the ideals and design features of Harry Colt and Stafford Vere Hotchkin blended with his own view of how the course should play in modern times.

The plan was approved in in January 2016 and planning commenced for a start in December 2016. It was agreed that all 18 holes would be renovated at a rate of six holes a year for three years. Tom Doak and his team carried out the shaping and the in-house greenkeeping team completed the re-instatement work. Holes 7, 8, 9, 10, 11 and 13 were completed in phase 1, holes 5, 6, 12, 14, 16 and 17 in phase 2 and holes 1,2, 3, 4, 15 and 18 in phase 3. During this project, 43 new bunkers were introduced/re-introduced, three greens were lifted and re-shaped, 32,170 square metres of turf laid by hand (equivalent of five football pitches), 650 metres of irrigation pipe dug out and replaced by hand, 90,000 square metres of scrub cleared and 10,000 trees removed. Natural England had a clerk of works on site during the project to approve the work methodologies used.

There were some serious challenges during this time, particularly in phase 2 when inclement weather disrupted the work for seven weeks. This is considered to be one the largest (if not the largest) course renovation project to have been carried out by an in-house team. 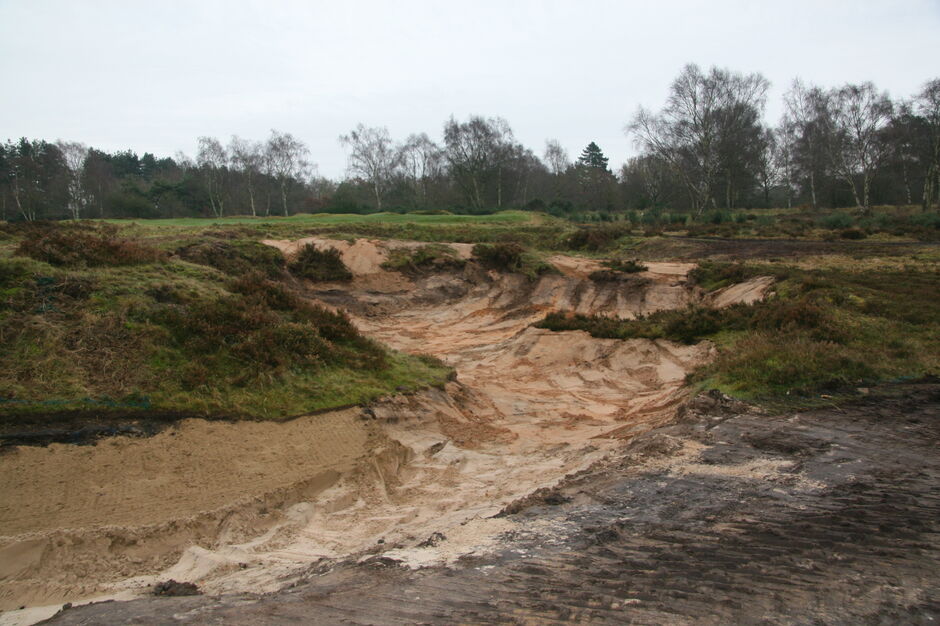 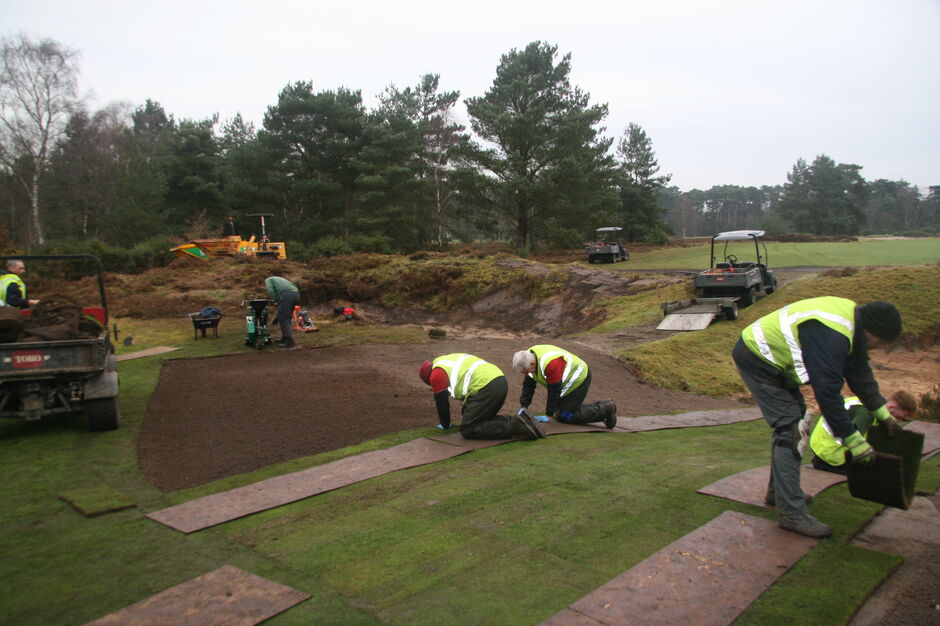 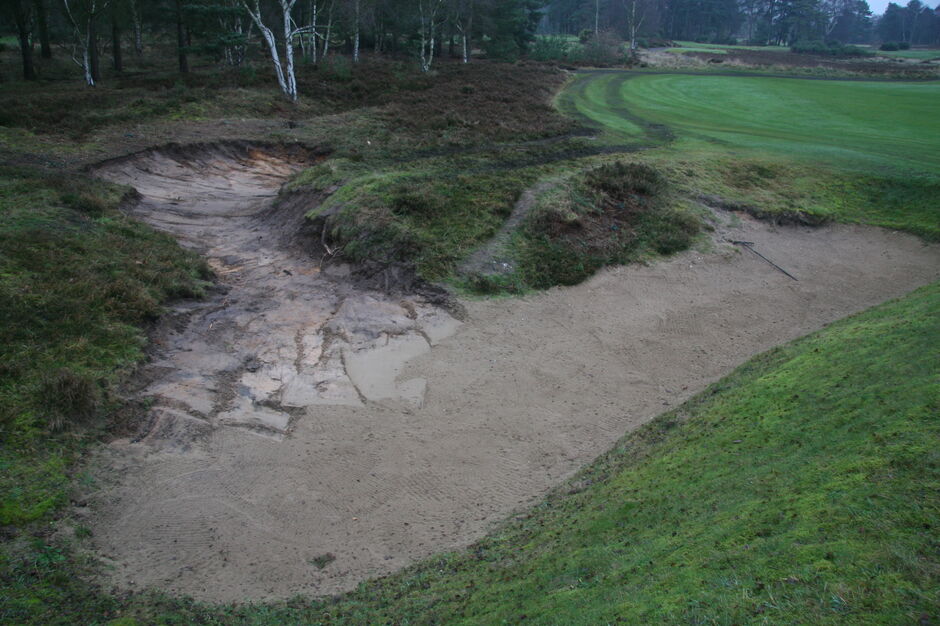 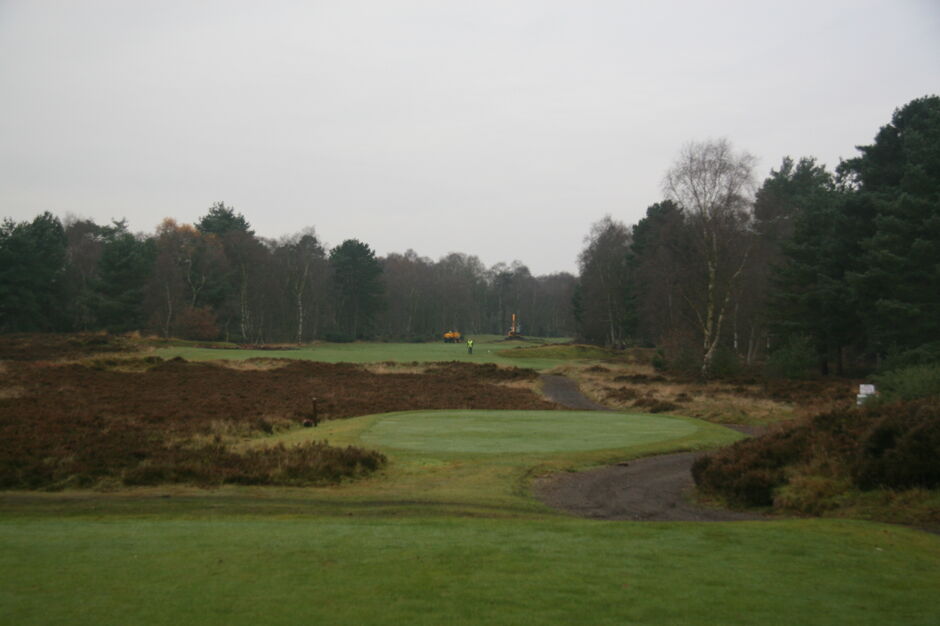 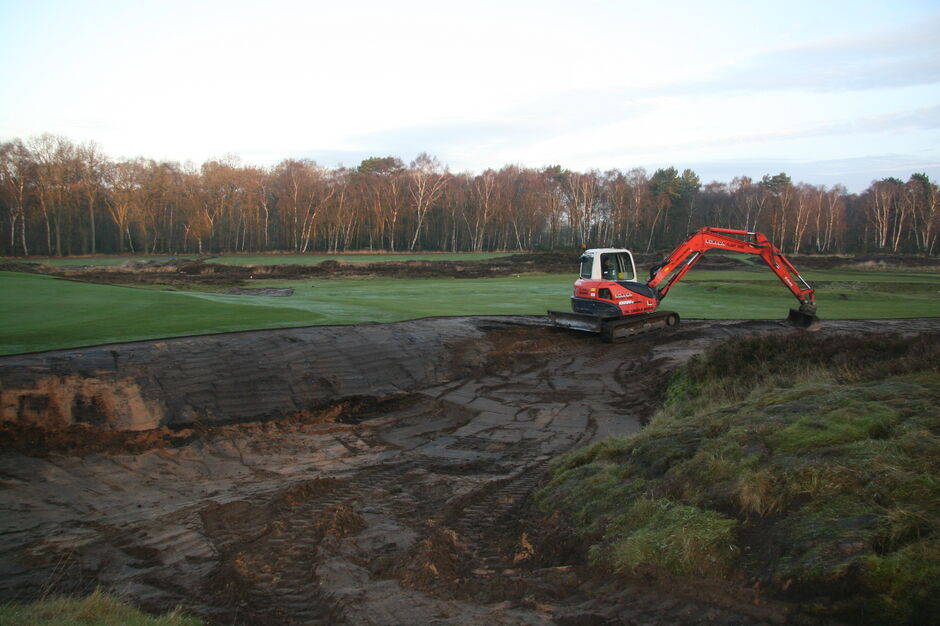 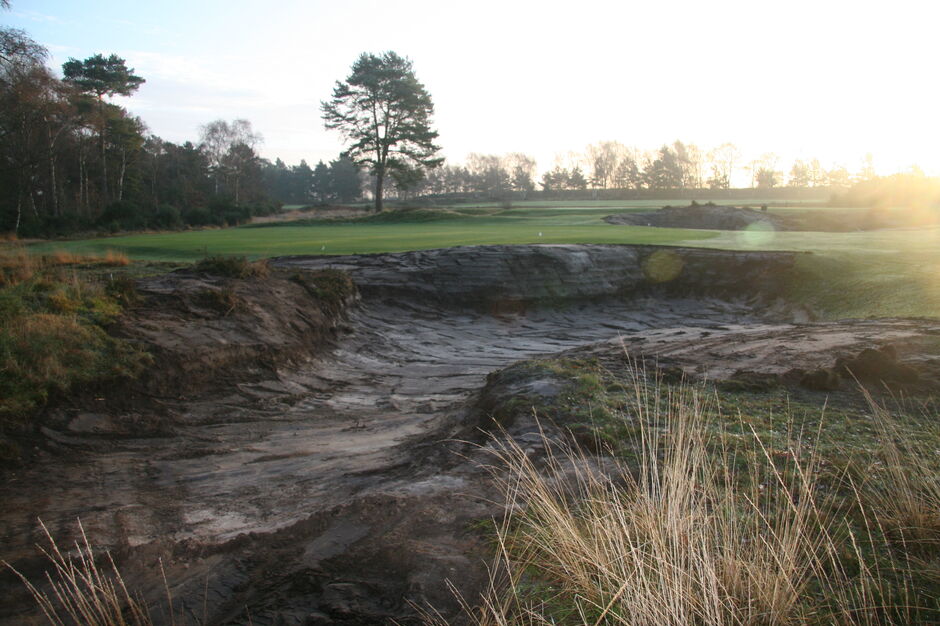 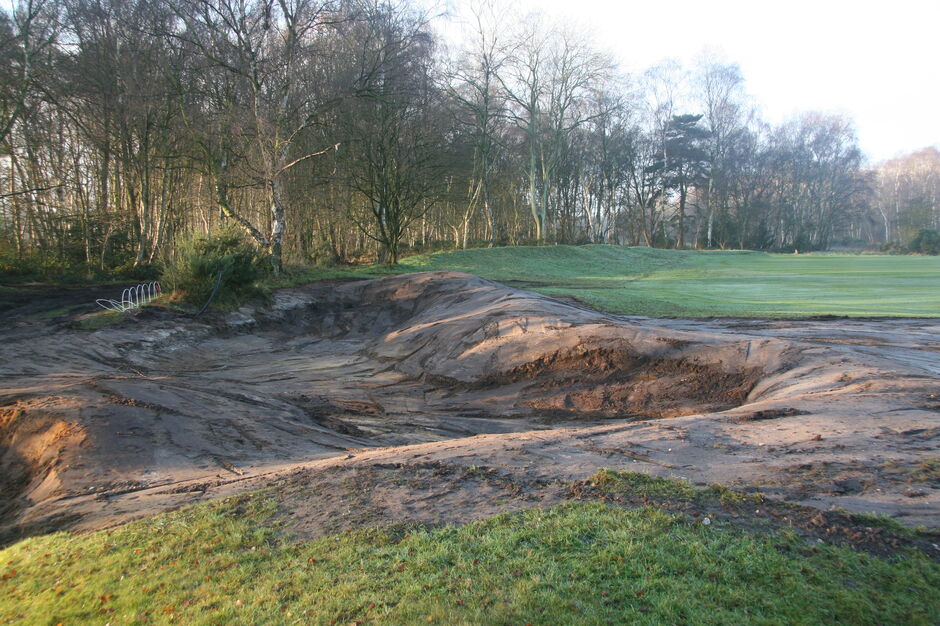 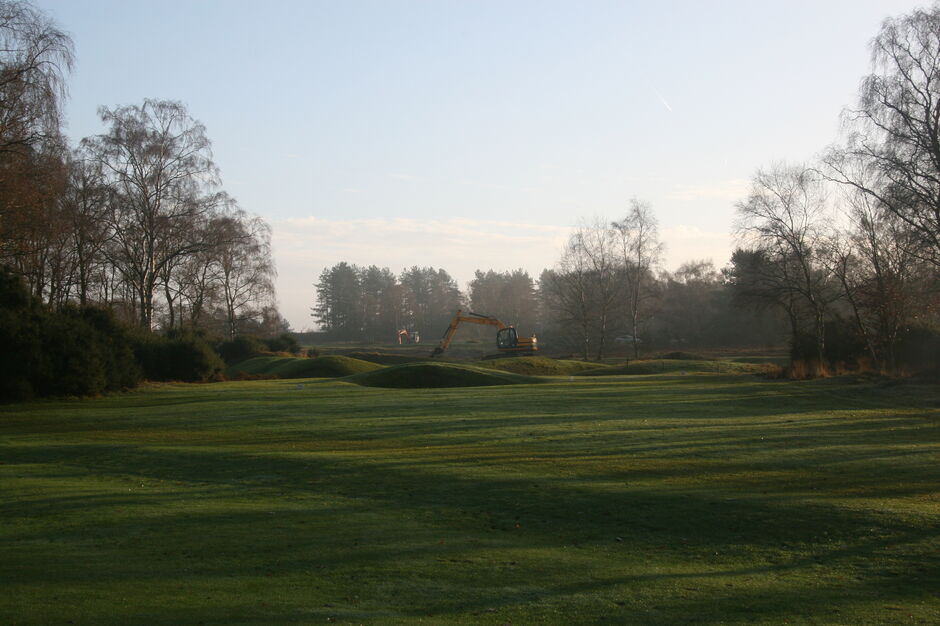 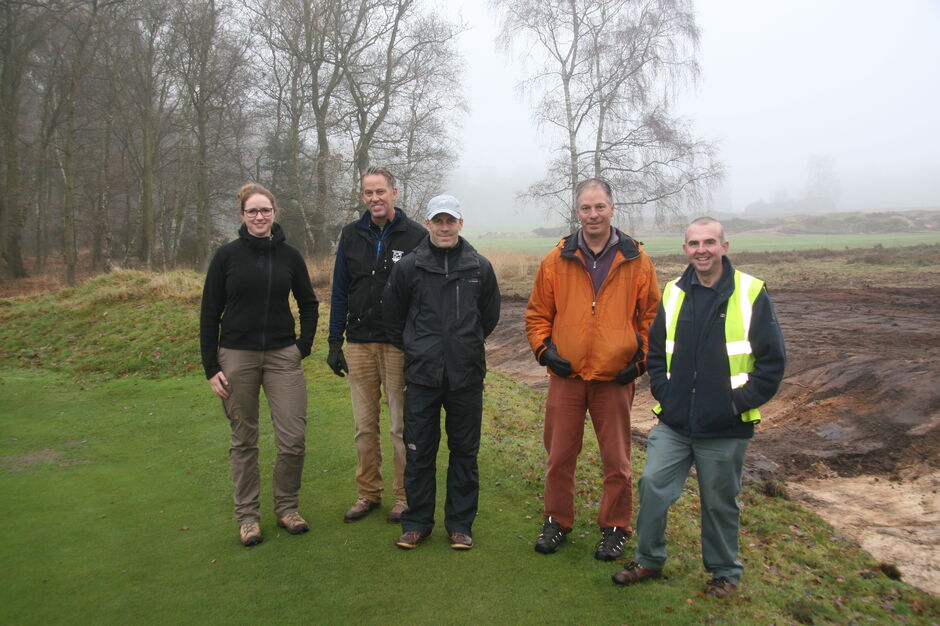 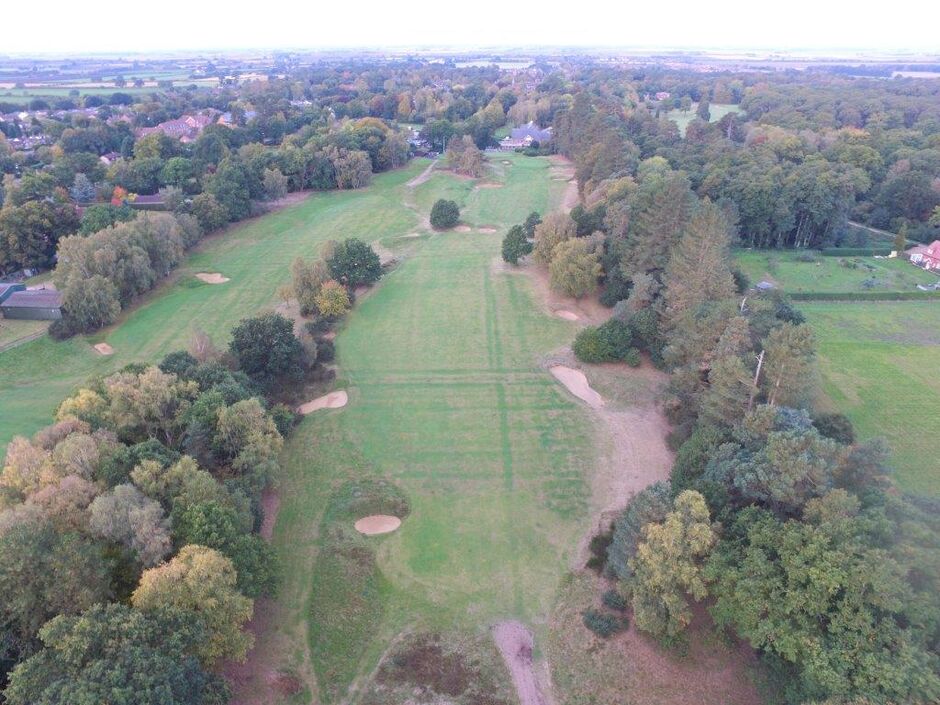